It costs about $500,000 to move a massive vacuum operation to a new location.  Save Crystal River moved its heavy equipment and water processing gear to a lot on Paradise Point Road in 2017, behind the Sun Bank on US 19 in Crystal River.

Imagine a hose that is 8 or 10 inches across. It looks like a city water main. We need a hose this large to vacuum out lyngbya and several feet of decay at the bottom of the canals.  We save energy by keeping the pumps that run the vacuum close to where work is being conducted. The area around Three Sisters Springs was a long way (in clean-up terms) from where the 2015 and 2016 work occurred. The whole system was picked up and moved about a mile. Ground was cleared, clean surface material was brought in, and a safety fence was erected around the worksite. Then we brought the heavy equipment in.

In the late 1950s, and early 1960s in Crystal River, Florida, a neighborhood was created next to the property currently containing Three Sisters Springs. These springs are part of the Crystal River National Wildlife Refuge. Now, hundreds of homes are within a few blocks of the springs. Many are on man made canals, carved out of lime rock with draglines.  Many of these canals are also spring fed, creating a lattice of residences close to the refuge. For decades, the water was so clear that seeing the bottom was possible almost all the time.

But like other parts of the bay, these areas fell victim to storm surge which killed the vegetation.  Then Lyngbya, a filamentous algae that fed on the nutrients of decomposing plant matter on the bottom of the canals, became dominant. During summer months, Lyngbya bloomed from the bottom to the surface in tall columns that turned the water green, and left its slime on everything.

Two ideas describe the areas cleaned and replanted in 2017:  close to the highway, and previously measured. The first canals cleaned in 2017 were close to US 19, and west of Three Sisters Trail. This work exposed 11 large vents – holes from which water gushed, that were a foot wide or larger. These vents are large water emitters. Part of the strategy for cleaning near the large springs first is to increase water flow. The more water coming out of the ground near the source of the river, the greater the washing action to flow nutrients and waste away. It might seem impossible for a foot of muck to clog a spring, but water follows the path of least resistance. A deep bed of detritus (decomposing matter) is capable of forcing water to go elsewhere. 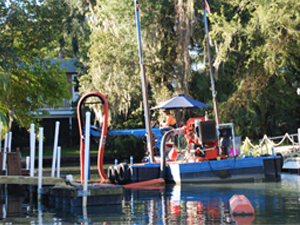 The second area was previously measured.  As part of the 2015 pilot work, a canal between 3rd and 4th Avenues was measured so that it could be a “control” for the work done near Hunter Springs.  This canal had feet of rotting debris covering the bottom, and while it had turtles and smaller fish, little else was there.  This canal was the focus of work in late September and October.

By the middle of November 2017, work was completed on two canals and the run that passes under Three Sisters Trail.  Trained crews then planted grasses and put in place exclusion cages to give the eelgrass time to put down roots and begin spreading. Scientists visited the area every week for the next month, and twice in the month after that, taking care of the cages, removing more Lyngbya. This work ensured a good start for the young grasses. The young plants got a boost because regular monthly cleanings for the cages, and spot cleaning for the canal gave the project a great chance for success.

Grass meadows were growing, fully established in several of the canal areas by mid 2018. By that time work started on the canal closest to the west side of  Three Sisters Trail.  That canal was full of rotting debris. Many “feet deep” of muck was removed, revealing some large spring vents. The work progressed to the next canal over, and now two vacuum barges worked in tandem, preparing the bottom for planting as September began.

Save Crystal River plans to continue cleaning canals in 2018.  The graphic below shows progress, with green areas cleaned, red areas in process, and blue areas planned for later in 2018.  Please follow our efforts on this website and on Facebook, to learn what we are doing.  We will ask when we need you to chip in a donation, call your representative, or share our message.  Our organization secures funding for the clean-up and restoration.  But we can’t use those funds to run our offices, keep you informed, and do all the work needed to keep our project moving forward.  If you can spare even $10, please donate. 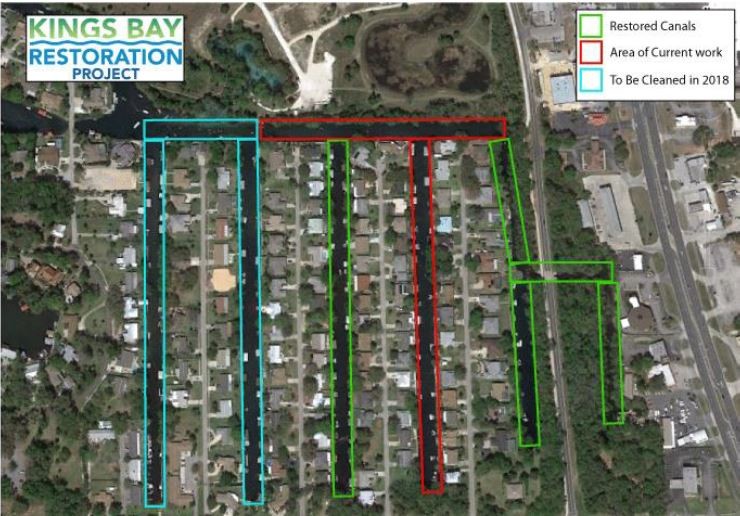 As of August 2018, this work around Three Sisters (top) has made significant progress.

Donate. You can help!